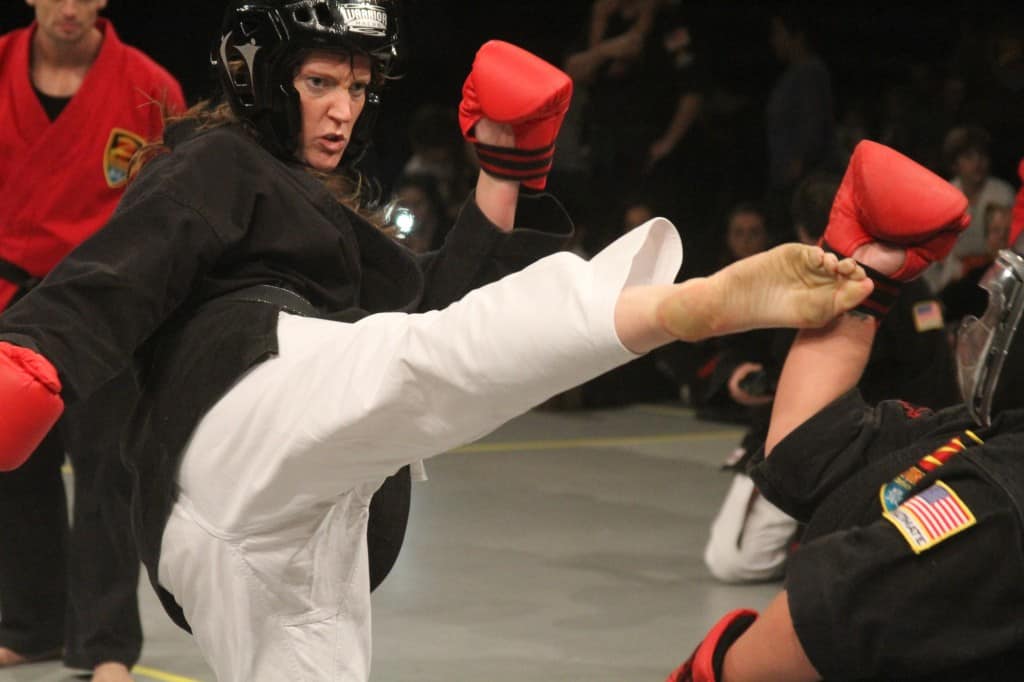 The amount of information there is to teach regarding how to spar better could cover volumes, but since we are pressed for time and space in this article, I will share with you a story that led to what is being called the, “Six Sparring Secrets”.

I once had a family friend come to me who was going to be testing for her Black Belt and she was nervous about her sparring ability.  She was trained by my instructor – who still is one of the most talented martial artists I’ve ever seen, so she had been trained properly – but she was lacking confidence and asked, “What are the main things to remember so that I spar well?” I told her that she had nothing to worry about; that she had been trained properly and just needed to relax and go do her best.

She said to me, “I know, but I feel like I need some basic ground rules when I go out there. I have plenty of technique, but feel like I need a mental game plan or outline. Does that make sense?”

It did, so I shared with her the following six keys – and she dominated on her test, fighting like a champ and passing with flying colors.

1. Always control the distance – when you are paired off, you bow to the instructor and then your partner.  As soon as that is done, most people get on guard.  Get on guard – and then take another huge step back.  You do this so there is too much distance between you and your partner, in case he has a speed advantage or likes to launch blitzing, surprising attacks to people.

2. Make him fight your fight – Many people are good at certain techniques or ranges.  Shorter fighters like to get inside and bang on you, then exit out the side.  Taller fighters like to keep you at long range.  Wrestlers and grapplers want to close the gap, grab you and get you on your back.  Quickly determine what it is they want to do – and don’t let them do it.  If they want to kick you, get too close to kick.  If they are punchers, tie them up and clinch them or keep them out on the end of your kicking range.  By keeping him from his strengths – and catering to yours – you gain the advantage.

3. Always leave a calling card – I got this idea from my full contact martial arts fighting coach; he said that whenever you move away from your opponent, hit him with something on the way out.  When you do this, it forces him to think about defending that attack, instead of attacking you as you break contact.  A good example is this: many martial artists initiate an attack, score or clash with their opponent, and then simply back straight up on the same angle they attacked, without doing a thing to keep their opponent from chasing them.  A better technique is to exit towards the side, throwing a defensive kick or backfist as you leave.  This covers your escape and keeps your opponent reacting to you.

4. Never charge an oncoming train – In the martial arts, no matter who you are sparring with or what size they are, it is almost always a bad idea in the martial arts to attack them head-on.  Always be looking to take an angle when attacking, even if it is only an inch or so off to the left or right.  Even a slight angle change can alter the power, speed and perception of your attack and the reaction of your opponent.

5. Be the firstest with the mostest – In the martial arts – and many other life situations – when in doubt, attack.  Many people never launch their attacks or try their techniques because they are afraid they won’t work or they are too far away.  You will never know unless you try – so go for it.  Remember, while you are sitting there, thinking about what martial arts technique you are going to do, your opponent may take that opportunity to attack.  Don’t hesitate – just go.

6. Don’t be a One Tool Mechanic – Can you imagine trying to work on a car – with one wrench and nothing else?  No screwdrivers, sockets, different size wrenches, power tools, nothing?  That is what happens when you spar using only your favorite martial arts technique or just one punch over and over and over again.  Remember that you have two hands, two feet and a ton of combinations that  can be created with them.  You won’t develop any skills unless you try new things to see how they work.

Follow these six keys and your martial arts skills will develop to a Black Belt level and beyond.

This website uses cookies to improve your experience while you navigate through the website. Out of these, the cookies that are categorized as necessary are stored on your browser as they are essential for the working of basic functionalities of the website. We also use third-party cookies that help us analyze and understand how you use this website. These cookies will be stored in your browser only with your consent. You also have the option to opt-out of these cookies. But opting out of some of these cookies may affect your browsing experience.
Necessary Always Enabled
Necessary cookies are absolutely essential for the website to function properly. This category only includes cookies that ensures basic functionalities and security features of the website. These cookies do not store any personal information.
Non-necessary
Any cookies that may not be particularly necessary for the website to function and is used specifically to collect user personal data via analytics, ads, other embedded contents are termed as non-necessary cookies. It is mandatory to procure user consent prior to running these cookies on your website.
Functional
Functional cookies help to perform certain functionalities like sharing the content of the website on social media platforms, collect feedbacks, and other third-party features.
Performance
Performance cookies are used to understand and analyze the key performance indexes of the website which helps in delivering a better user experience for the visitors.
Analytics
Analytical cookies are used to understand how visitors interact with the website. These cookies help provide information on metrics the number of visitors, bounce rate, traffic source, etc.
Advertisement
Advertisement cookies are used to provide visitors with relevant ads and marketing campaigns. These cookies track visitors across websites and collect information to provide customized ads.
Others
Other uncategorized cookies are those that are being analyzed and have not been classified into a category as yet.
SAVE & ACCEPT