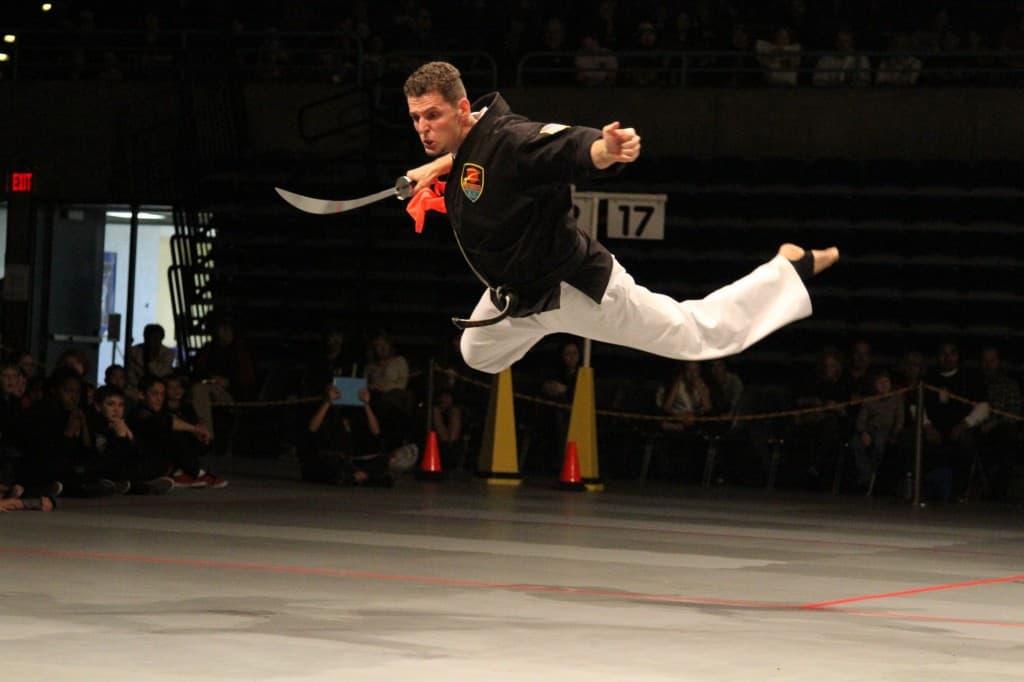 Katas – also called forms – have long been considered a fundamental training tool of traditional martial arts programs and can be one of the most powerful tools in developing your karate skills.

While it is true that Bruce Lee, the pioneer martial artist, film star and creator of the art Jeet Kun Do,  said that forms training was “too restrictive”, what he failed to mention – and what others in the martial arts fail to realize – is that Bruce Lee did kata training from his original martial arts style, Wing Chun, for years and years before he stopped using katas as a training tool.

Dan Gable – legendary wrestler from Iowa, 181-1 as an amateur wrestler, Olympic Gold Medalist, Collegiate Wrestling Champion and Fifteen time NCAA Wrestling Championship Coach said that “Practice without improvement is meaningless.”  Simply “going through the motions” of your martial arts forms without paying attention to the following ten keys is a waste of your time. Make sure you pay attention to these keys and watch what happens to your skill level and performances at tournaments.

It’s all just punching and kicking – If you think about it, your katas are made up of your basic punches and kicks, mixed into different combinations. Just like the best ingredients  – combined correctly – help make your food dishes taste incredible, your basics are the ingredients that make your forms look phenomenal. Your punches and kicks must be crisp and sharp;  in the Marines, we used to call it, “Snap and Pop”.

Just like a house, your foundation is everything – Like a house, if the foundation is weak, it doesn’t matter if the house is the Taj Mahal, it won’t be strong. In the martial arts, if your stances aren’t correct, you won’t be able to hit and move with speed and power. You want your stances as wide or as narrow as they need to be for the technique; deep enough to draw power from the earth and for you to be balanced and strong, but not so wide that you are heavy-footed and unable to move or kick without a major shift in your stance.

Always Hit with 100% of Your Body Weight – In martial arts, forms training was designed to practice self defense techniques without a partner present. Only through proper visualization and practicing “as if” you were defending yourself will you be able to train with the power necessary. In your mind, you have to “see” the attackers and perform as if you were defending yourself.

If you were defending yourself for real, you wouldn’t be throwing fancy high kicks that are weak and above head level; you would make sure that every technique was delivered with all your body weight and aimed at the appropriate target.

Don’t be a Stumbleina – You may have heard the saying from the old “Kung-Fu” TV series, “Balance in all things, Grasshopper.” In the martial arts, if you are not balanced, nothing else you do is going to work effectively. Imagine throwing the most powerful roundhouse kick known to man – only to fall on your rear-endus while you are doing it. Even if you do score the kick, you are in no position to follow up with another technique. The more balanced you are, the smoother and faster you are and the easier it is to smoothly transition from one technique to the next.

Focus on Functional Speed – In martial arts training, there is something called Functional Speed. Functional speed has two keys to it: first, it is smooth because smooth is fast; there is no wasted motion.  Many people throw a jab – and accidentally pull their opposite arm to the rear as they jab, making their follow up punch (the cross or rear/reverse punch) have to travel farther, thereby slowing that second punch down because it has farther to go.

Second, there is no tension. When you tense up your muscles, you slow yourself down and tire yourself out. Remember that katas are like a fight, so your combinations would not be all one speed, nor would your movements;  they would be bursts of combinations and activity, with changes of pace and timing mixed throughout.

Remember Dan Gable – I was fortunate enough to hear Coach Dan Gable speak at an event and then briefly meet him afterwards.  Besides being surprised in the phenomenal shape he is still in, and the fact that he is my size (I thought he was bigger), was that he was Intensity in human form. When he got up to speak, the room felt as if it was filled with electricity. He was so intense – and he pulled you into that intensity – that he spoke for two hours and it felt like ten minutes.

When you are performing, you want your intensity – your essence – to fill the ring, the room and your judges’ energy.  What you lack in skill you CAN make up in heart and desire.

Focus, Grasshopper – I used to tell the kids that during their performances, I wanted them so focused that if a clown walked through their ring on fire, juggling chainsaws and wearing a pink tu-tu that they not only wouldn’t crack a smile – they wouldn’t even notice. When you get this focused, it does wonders for our intensity level and every other part of your training.

In strong winds, it is the stiffest trees that snap- In the martial arts – and in life – flexibility is a must. When it comes to your body, the more flexible you are, the stronger you are. In nature, things that are stiff are punished and things that are flexible survive. Work on your flexibility so that your power, speed and balance can shine through.

Pick your most challenging Kata – There is no honor – nor is there any reason to feel good about yourself – if you are a Blue Belt and you try to compete using a yellow belt form. While being an expert at your basic forms is important, you are EXPECTED to be good at the basic forms, that is why you are a Blue Belt.  hallenge yourself by picking one of your most advanced katas and pushing yourself to perform it at your best.

Two is One, and One is None – I had a personal trainer that was a former Navy SEAL and he reminded me of something I was taught in the Marines regarding backups; he said to me, “Two is one, and one is none.” He went on to explain that when you are diving in a hundred feet of water planting explosives, and the ONE detonator you brought with you does NOT work, what do you do then?  You better get out your backup detonator because there isn’t a store that sells detonators down 100 feet underwater.

Make sure you know the rules regarding a tie in your event.  In the unlikely event of a tie, some martial arts tournaments may require you to perform again with a different form. Even if they don’t require a different form, have a solid back up. If you can go out and do a different form just as well as the first, you are showing how multidimensional you are and your level of skill.

Follow these tips and you will be a Martial Arts Kata Champion in no time. On top of that, practicing every day as if you were in a martial arts competition will accelerate every aspect of your training and skyrocket your abilities.

Z-Ultimate Self Defense Studios
Huntington Beach, CA 92649
Phone: (714) 495-4541
HQ@zultimate.com
By clicking “Accept”, you agree to the storing of cookies on your device to enhance site navigation, analyze site usage, and assist in our marketing efforts. ACCEPT REJECT
×
Manage consent

This website uses cookies to improve your experience while you navigate through the website. Out of these, the cookies that are categorized as necessary are stored on your browser as they are essential for the working of basic functionalities of the website. We also use third-party cookies that help us analyze and understand how you use this website. These cookies will be stored in your browser only with your consent. You also have the option to opt-out of these cookies. But opting out of some of these cookies may affect your browsing experience.
Necessary Always Enabled
Necessary cookies are absolutely essential for the website to function properly. This category only includes cookies that ensures basic functionalities and security features of the website. These cookies do not store any personal information.
Non-necessary
Any cookies that may not be particularly necessary for the website to function and is used specifically to collect user personal data via analytics, ads, other embedded contents are termed as non-necessary cookies. It is mandatory to procure user consent prior to running these cookies on your website.
Functional
Functional cookies help to perform certain functionalities like sharing the content of the website on social media platforms, collect feedbacks, and other third-party features.
Performance
Performance cookies are used to understand and analyze the key performance indexes of the website which helps in delivering a better user experience for the visitors.
Analytics
Analytical cookies are used to understand how visitors interact with the website. These cookies help provide information on metrics the number of visitors, bounce rate, traffic source, etc.
Advertisement
Advertisement cookies are used to provide visitors with relevant ads and marketing campaigns. These cookies track visitors across websites and collect information to provide customized ads.
Others
Other uncategorized cookies are those that are being analyzed and have not been classified into a category as yet.
SAVE & ACCEPT